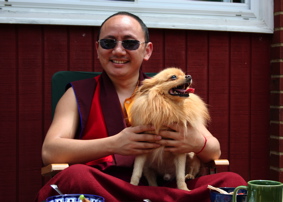 Tenzin Kunzang Jigme, the seventh H.H. Taklung Matul Rinpoche, was born on March 15th 1977 to a family in Ladakh, India. In July 1987, His Holiness the 14th Dalai Lama formally recognized him as the reincarnation of the sixth H.H. Taklung Matul Rinpoche, Thupten Jigme Choechok. He has received the traditional Taklung Kagyu teachings from His Holiness Taklung Shabdung Rinpoche Thupten Jangchup Choechok Nyima. He is one of the heads of the Taklung Kagyu order of Tibetan Buddhism.

From august 1987 till february 1990 he studied basic forms of Tibetan literature, calligraphy and rudimentary Buddhism at Namgyal Monastery, Dharamsala.

He received his formal training including Buddhist philosophical studies under the guidance of H. H. the Dalai Lama at the Institute of Buddhist Dialectics School, Dharamsala, from march 1990, and completed his Sutra and Tantra studies in april 2004.
From november 2004 till november 2006 he was in Drikung Kagyu Institute, Dehradun.

Currently, Rinpoche resides mainly in Kullu Manali, in Himachal Pradesh, India.
He travels around the world to teach.
Meanwhile, he is building a Taklung Kagyu monastery in Jampaling, Nepal in order to preserve the Taklung Kagyu lineage and propagate the Dharma; thus establishing the main seat of Taklung Kagyu school of thought outside of Tibet.